This cemetery is the final resting place for 368 American servicemen and it is the only WW I cemetery in Belgium. The soldiers burried here all served in 4 US Army Divisions, being the 27th "New York" Division, the 30th "Old Hickory Division" from Tennessee, the 37th "Buckeye Division" from Ohio and the 91st "Wild West" Division with soldiers coming from California, Idaho, Montana, Nevada, Oregon, Utah, Washington and Wyoming.

A short while ago, Fire Observers vzw was invited to attend this year's ceremony. We were very humbled and honored to receive this invitation and were very proud to send out a delegacy of 14 Fire Observers. All Fire Observers present were those who participated in the training program Atlanta 2014 and a few board members.

Besides us there were 300 more invitees like the Representative of the King, high military officials of the Belgian Armed Forces, US Armed Forces and NATO, several politicians, the Deputy Chief of Mission of the US to Belgium, veterans,… Over a 1000 civilians attended the ceremony as well.

The Superintendent of Flanders Field American cemetery welcomed us all and he was followed by a US Military Chaplain for the invocation. SHAPE Commander Gen. Breedlove, the Mayor of Waregem and the Deputy Chief of Mission of the US to Belgium Mark Storella came up front to speak and pay tribute. The National Anthems were sung by all school children of the Waregem schools.

The laying of the wreaths were followed by a run of volleys, playing of Taps and the raising of the Colors. The famous poem "In Flanders Fields" was brought and the Chaplain ended with the Benediction. The ceremony ended with the National Anthems.

After the ceremony there was a moment to walk around and talk and take pictures with numerous people.

Diner was served in a restaurant in the city of Ypres where we also attended the Last Post Ceremony at the Menin Gate. We stood at attention, along with a platoon of Bristish soldiers.

This beautiful ended by a few drinks at the town square. 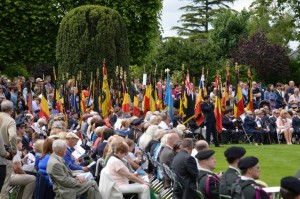 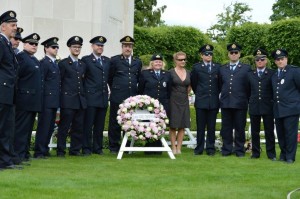 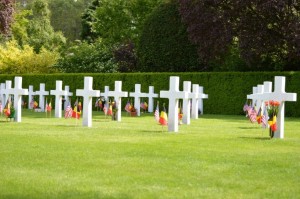 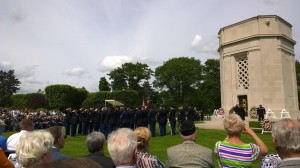